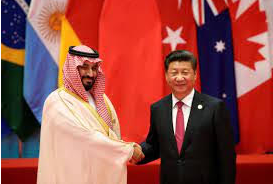 During Chinese President Xi Jinping’s visit to the kingdom, Saudi Arabia and China signed a number of bilateral agreements, indicating the two countries’ growing ties. The US regarded the agreements with caution, seeing them as yet another sign of the growing schism between traditional allies Saudi Arabia and the US.

China is currently Saudi Arabia’s largest trading partner, with bilateral trade valued at $87.3 billion in 2021. China’s exports to Saudi Arabia totaled $30.3 billion, while the kingdom’s imports totaled $57 billion. The following are a few areas where China and Saudi Arabia have strong ties.

China’s primary oil supplier is Saudi Arabia. According to Chinese customs data, it accounts for 18% of Beijing’s total crude oil purchases, with imports totaling 73.54 million tonnes (1.77 million barrels per day) in the first ten months of 2022, worth $55.5 billion. Aramco, the Saudi state-owned oil conglomerate, has annual supply agreements with a half-dozen Chinese refiners.

Early in 2022, Aramco made the decision to invest its single largest sum of money in the second-largest economy in the world by constructing a $10 billion refinery and petrochemical complex in northeast China. Aramco will supply up to 210,000 bpd of crude oil for the project, which is scheduled to be operational in 2024. It combines a 300,000 bpd refinery and a 1.5 million tonnes per year ethylene plant.

Sinopec, a major oil company in China, also owns 37.5% of Yanbu. A 400,000 bpd refinery is run by Aramco Sinopec Refining Co (YASREF), a joint venture with Aramco, in Yanbu on the Red Sea coast.

MOU between the Saudi government and Huawei for the construction of high-tech complexes in Saudi cities and cloud data computing.

Xi and the Saudi King Salman have agreed to a comprehensive strategic partnership.

In a joint statement, the two nations reaffirmed their commitment to upholding each other’s fundamental interests, national sovereignty, and territorial integrity, as well as the basic principles of international law, international relations, and non-interference in other countries’ internal affairs. When it came to the recent tensions between China and Taiwan, the Saudi side also supported the one-China policy.

Additionally, the Belt and Road Initiative and Saudi Arabia’s Vision 2030 were resolved to work more closely together as the two nations emphasised the value of their economic ties.

The two sides also denounced “double standards” on counter-terrorism in an apparent jab at the US.