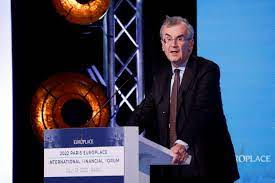 The European Central Bank could cap the amount of planned digital euros, an electronic version of banknotes and coins, so they do not deprive banks of deposits, Bank of France Governor Francois Villeroy de Galhau said on Tuesday.
The ECB has been working on designing a digital currency, a direct claim on the central bank much like in the case of cash, and may decide to launch its development by the end of next year.
European policymakers are eager to build the infrastructure for retail and wholesale digital payments so that Europe does not fall behind China or become dependent on U.S. tech companies.
However, the industry and some policymakers are concerned that people could park savings in digital euros, potentially reducing traditional deposits which are a cheap source of funding on banks` balance sheets.
“Regarding the possible risks of banks` deposit conversions, we must and will ensure that a digital euro remains a means of payment rather than a saving/investment asset,” Villeroy told the Paris Europlace financial conference in Paris.
“This could be achieved by capping the maximum amount of digital euro in circulation,” he added.
Villeroy said that digital euros were less problematic in the wholesale market, where the French central bank has carried out nine experiments with private and public partners over the past year and has four or five planned for the rest of the year.
“This work ensures that we stand ready to bring central bank money as a settlement asset as early as 2023, with the implementation of the European pilot regime,” he added.