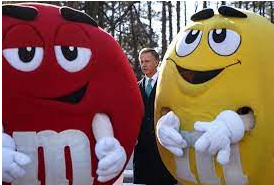 The well-known candy company M&M’s, which is owned by Mars Wrigley, declared on Monday that it would “indefinitely pause” production of its “spokescandies,” concluding that the cartoon figures with arms, legs, and minimal facial features were just too divisive for a divided nation to bear.

The characters, who have appeared in the company’s advertisements for decades, did not express an opinion on either abortion or the storage of top-secret information. However, due to a number of cosmetic changes made in recent years, figures on the political right, such as Tucker Carlson of Fox News, have criticised the candy as “Woke M&M’s.”

“America, let’s talk,” Mars Wrigley said in a statement on Monday, using language that anyone about to break up with someone would recognise.

The company stated, “In the past year, we’ve made some changes to our beloved spokescandies. We had no idea whether anyone would even notice.

The company asserted, “We definitely didn’t think it would crash the internet.” Few people believed it had.

The company went on to say, “But now we get it — even a candy’s shoes can be polarising,” which undoubtedly confused many people who had no idea what this statement could possibly mean. We’ll discuss that again.

The company stated that being divisive is “the last thing M&M’s wanted since we’re all about bringing people together.” “As a result, we’ve decided to stop using spokescandies forever.”

We are confident Ms. Rudolph will champion the power of fun to create a world where everyone feels like they belong, the company said. “In their place, we are proud to introduce a spokesperson America can agree on: the beloved Maya Rudolph,” the actress and “Saturday Night Live” alum who has not, to date, been at the centre of any culture wars.

The choice to hire Rudolph as the “chief of fun and spokesperson” for M&Ms had been “in the works for a while,” according to Gabrielle Wesley, chief marketing officer for Mars Wrigley North America. The company announced that Rudolph will take part in an advertisement that will air during the Super Bowl LVII broadcast on February 12.