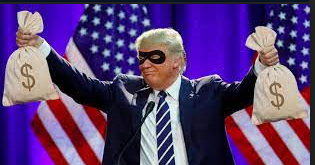 The namesake business of former president Donald Trump was found guilty on Tuesday of conspiring to defraud tax authorities.

A lawyer for the Trump Organization named Alan Futerfas stated that the verdict would be appealed.

Here are some examples of the tax fraud allegations made by the prosecution against the business and its executives. Executives received free, low-cost, and reduced-rent apartments from the Trump Organization; these apartments were not counted as income.

Executives received bonuses as though they were self-employed individuals rather than salaried workers. Trump personally authorised bonus checks from his Florida club Mar-a-Lago, the Trump International Golf Club, and other Trump organisations that might profit from the deductions. Trump has claimed that the case is politically motivated despite not being charged in it.

Checks written to a mailroom employee were cashed and recorded as “Holiday Entertainment,” but they were actually given to the CFO for personal tips. Executives were given tax statements that concealed their Manhattan residences, preventing them from paying city taxes. The employees’ taxable income did not include the personal costs.

However, some costs were deducted from salaries and bonuses, resulting in lower taxable income for the executives and lower payroll taxes for the business. The plan gave executives more money while restricting raises. CFO Weisselberg calculated that the $100,000 in personal expenses he received were worth $200,000 in salary to him.