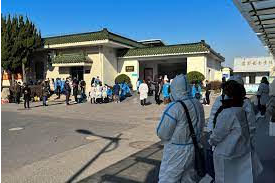 Over the next few days, China will experience one of the largest global mass human movements. This will be because most offices are closed during the Lunar New Year celebrations and the ensuing travelling, known as Chunyun. According to Google Arts and Culture, it is observed by roughly one-fifth of the world’s population and is also observed in other regions of Asia.

Beginning on Saturday, Chunyun (January 7). Over the next 40 days, China anticipates more than 2 billion passenger trips, an increase of 99.5% compared to last year and reaching 70% of trip totals in 2019, according to Reuters. But in nations like South Korea, where Chinese tourists arrive, this has also caused concern. According to the AP, China on January 10 suspended visas for Korean tourists in retaliation for Korea’s demand for mandatory Covid tests.

After two years of Covid-related limitations and a strict Zero Covid policy, the movement will be permitted for the first time since the pandemic started in 2023 on a sizable scale. As of January 10, daily cases are increasing, a few weeks after scenes of chaos were seen in the nation’s hospitals after the Covid policy was relaxed. As a result, there is uncertainty about the future as well as cautious optimism.

According to the Lunar Calendar, Chunyun is simply the time frame surrounding the Chinese New Year. It was once translated as “spring transportation” by the Chinese news agency Xinhua. Added is:

“For people who work away from their hometown, it symbolises the joy of seeing loved ones again and the agony of trying to get a train ticket; for railway staff, it symbolises 40 days of gruelling work; for scalpers, it suggests a busy season of business; for the government, it is a test of administrative prowess.”

The New Year’s Day is determined based on the position of the moon and has no set date. It falls on January 21st this year. Tet in Vietnam, Solnal in Korea, and Losar for Tibetans are additional names for the Lunar New Year. It lasts 15 days, starting with the first new moon of the lunar calendar and ending with the first full moon.

Feasts, fireworks, lanterns, and cultural events like lion dances are all part of the New Year celebrations in many different countries. During a lion dance, a large group of people move in unison beneath a giant lion made of cloth and embellishments. This is meant to represent new beginnings and the warding off of evil spirits in the new year, as is the case in many cultures.

According to Nancy Yao Maasbach, president of the Museum of Chinese in America, money is also given as a gift in red envelopes in China because the colour is considered lucky. This is done in silk pouches in Korea.

China has consistently reported increased travel during this period over the years, with railway lines, in particular, experiencing a rush as city dwellers make their way to the smaller towns and villages.

After three years, mainland China opened sea and land crossings with Hong Kong and abolished the quarantine rule for travellers, “dismantling a final pillar of the zero-COVID policy that had shielded China’s 1.4 billion people from the virus but also cut them off from the rest,” according to Reuters.

This is where the concern arises because, despite the fact that many other nations experience travel and crowds, none of them have China’s lockdown-first virus containment strategy, which has resulted in minimal exposure to the virus and the development of antiviral immunity. According to Our World in Data, daily cases have been increasing on a steep curve since around Christmas, with nearly 7,666 new cases being reported every day as of January 8.

It is essential for China to release the potential of repressed demand brought on by the pandemic. Notably, a generalised economic slowdown was observed even before 2020.

China’s economic growth was pegged by the World Bank and private sector forecasters at 2.2% for the previous year. Although the International Monetary Fund predicts a 4.4% recovery this year, that would still be one of the lowest levels in the previous three decades.

However, other nations continue to be wary of these plans. The US has stated that it will make the Covid test mandatory for travellers leaving China. Pre-boarding coronavirus test results showing a negative result will be required for travellers on direct flights leaving Japan, according to Prime Minister Fumio Kishida. Additionally, Japan will keep requesting that airlines restrict new flights from China. China has responded by calling these plans discriminatory and announcing that it will take countermeasures.