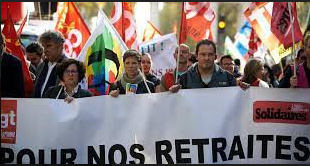 The controversial change to France’s pension system, which will raise the retirement age from 62 to 64, was unveiled by French Prime Minister Elizabeth Borne on Tuesday, January 10. Widespread, outspoken criticism of this announcement came especially from left-wing parties and organisations. On Thursday, the unions in France demanded a nationwide mobilisation (January 19).

The proposed changes are a component of French President Emmanuel Macron’s ongoing commitment to strengthening France’s welfare system. The French government has argued that these reforms are necessary due to an increase in life expectancy in order to lessen the fiscal burden of pension payments on the state, much like the Vajpayee government did when it first introduced the NPS in India. French workers are all eligible for a state pension.

It should be noted that this is not Macron’s first attempt at pension reform. His prior attempts in 2019 were met with vehement opposition.

The minimum retirement age required to be eligible for a full pension will be gradually raised by three months each year beginning this year, according to Prime Minister Borne, who made the announcement during a press conference on the proposed reforms, according to Le Monde. This would continue until 2030, when the retirement age would have risen to 64.

According to the prime minister, starting in 2027, individuals will need to have worked for at least 43 years in order to receive a full pension. Although there will be some exceptions, most notably for police officers and firefighters, anyone who hasn’t put in 43 years of service will need to work until age 67 in order to retire with full benefits.

An important aspect of the reforms is a rise in some people’s pensions, particularly for those making the minimum wage. The most recent proposals call for raising the minimum pension for low-income workers with a full career to 85% of SMIC, or roughly €1,200 at the moment. More than 2 million workers currently fit into this category, and it’s likely that their pensions will increase by at least € 100 per month.

As was to be expected, many people, particularly in France’s left-wing, have not been pleased with these reforms. According to Euronews, France’s left-wing parties and trade unions argue that the proposed changes are not necessary to fund the country’s pension system. Instead, many have advocated overhauling France’s tax code and stepping up efforts to combat tax evasion.

After a meeting of labour leaders, the moderate CFDT union’s Laurent Berger told journalists that “nothing justifies such a brutal reform,” according to DW.

The most vulnerable people will be particularly impacted by requirements for career lengths and retirement age increases. For instance, the new 43-year career requirement is going to hurt women the most. Many women leave the workforce to raise families and come back after protracted absences. The proposed changes would require these women to work an additional 43 years or reach the age of 67 before they could receive full retirement benefits.

Furthermore, while indexing pensions to the minimum wage rather than inflation (as proposed by the reforms) will likely disadvantage workers over time, even though pensions will initially increase. Like in most other nations, the minimum wage in France has not increased in line with inflation. This implies that pension incomes could actually decrease over time.

The size of welfare payments received takes a backseat in France’s proposed reforms to fiscal stability and “achieving equilibrium” in order to build a sustainable pension system.

The reforms have sparked outrage among the entire French left. Jean-Luc Mélenchon, the head of the left-leaning La France Insoumise (LFI), blasted Emmanuel Macron on Twitter for the reforms, calling them a “social regression.”

The far right also criticised the proposal at the same time. “The French can count on all our determination to block this unjust reform,” wrote Marine Le Pen, leader of the far-right Rassemblement Nationale (RN).