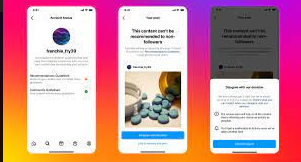 As far as you can tell, your social media posts are excellent, but nobody engages with them. Are you experiencing a “shadow ban”?

The phrase describes the perception—real or made-up—that social media platforms are acting covertly to reduce a post’s visibility. And lately, it’s been brought up a lot.

Elon Musk, the new billionaire owner of Twitter and a self-described “free speech absolutist,” first used the phrase in relation to the so-called Twitter Files, internal company records that were made public with Musk’s approval.

They revealed that in October 2020, one month before the presidential election, Twitter executives had discussed preventing news coverage of Hunter Biden, the president’s son, from coming from The New York Post.

According to Musk, the records showed that the company’s then-leaders had engaged in shadow banning. Twitter said it would change its policy for similar content after initially defending its action on the grounds that the reporting was unverified.

Musk was accused of shadow banning in the same month. The college student who ran the Twitter account @ElonJet, which followed Elon Musk’s private jet, discovered from Twitter staff members that the account had been purposefully shut down and tweeted about it. The account has been put on hold.

The phrase dates back to at least 2012, when Reddit users claimed that the site’s administrators had blocked a link to a Gawker article while admonishing transparency in public.

Over time, the term’s definition has changed. Now, even if they don’t necessarily believe a platform has engaged in any covert moderation, users may use the term “shadow ban” to describe their general resentment at not receiving the attention they believe they deserve on social media.

Private businesses are free to establish their own guidelines for content moderation, but true shadow bans are problematic for advertisers, users, and supporters of free speech because they covertly enforce unstated rules, according to Katharine Trendacosta, a tech policy expert at the Electronic Frontier Foundation.

They enable a business to manipulate content’s flow covertly without having to accept responsibility for doing so. Additionally, those who are silenced lack a mechanism for coming out of hiding.