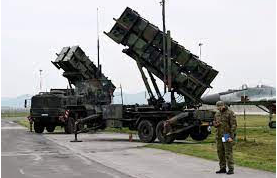 The Biden administration announced that it would give Ukraine another $1.85 billion in military aid before Ukrainian President Volodymyr Zelenskiy’s Wednesday visit to Washington, including the Patriot air defence system that the Ukrainian leader has said his nation urgently needs to fend off Russian attacks.

One of the most sophisticated air defence systems in the American arsenal, the Patriot, or Phased Array Tracking Radar for Intercept on Target, is a theater-wide surface-to-air missile defence system made by Raytheon Technologies Corp RTX.N.

The system was first put to use in battle during the Gulf War in 1991 with batteries defending Saudi Arabia, Kuwait, and Israel. It was then put to use again during the 2003 American invasion of Iraq.

Powerful radar, a control station, a power generator, launch stations, and other support vehicles are typically part of this mobile system.

Depending on the kind of interceptor being used, the system has different capabilities.

The North Atlantic Treaty Organization (NATO) stated in 2015 that the system’s radar has a range of more than 150 km (93 miles).

According to the think tank Center for Strategic and International Studies, a newly manufactured single Patriot battery costs over $1 billion, with $400 million for the system and $690 million for the missiles in a battery.

More than 240 Patriot systems have been produced by Raytheon, and 18 nations, including the US, are currently using them. Due to Iran’s threat to the region, the system has been in high demand in the Middle East.

Since 2015, the system has successfully deflected over 150 ballistic missiles, according to Raytheon.

In order to defend itself from Russian forces’ barrage of missile and drone strikes, Ukraine has stated that it needs more air defence systems.

Up to this point, the US has given Ukraine two National Advanced Surface-to-Air Missile Systems (NASAMS).

The Patriot system can shoot down the “kamikaze” drones Russia frequently uses to attack vital infrastructure in Ukraine, even though it was built to intercept threats like aircraft and ballistic missiles. However, it would be a very expensive way to get rid of drones, which only cost a few thousand dollars.