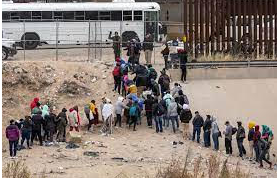 In order to prevent more nationalities from requesting asylum in the United States, the United States announced on Thursday that it would extend COVID-19 pandemic-era restrictions, known as Title 42, to expel migrants from Nicaragua, Cuba, and Haiti caught crossing the U.S.-Mexico border back to Mexico.

The White House also announced that it would provide more legitimate entry points for people from those countries who wish to apply for immigration from abroad.

In order to quickly send migrants crossing the U.S.-Mexico border back to Mexico or other countries, border agents are permitted to use Title 42, which was issued by U.S. health authorities at the start of the COVID-19 pandemic in March 2020. Under Republican former President Donald Trump, whose administration sought to severely restrict both immigration, the order was put into effect. In order to stop the spread of COVID-19 in crowded detention settings, the U.S. Centers for Disease Control and Prevention (CDC) stated at the time that it was necessary.

The order has drawn criticism and opposition from some public health professionals, Democrats, and advocates who claim it illegally prevents migrants from requesting asylum and exposes them to dangers like kidnapping and assault in Mexico. Republican states have sued to keep the order in place while immigrant advocacy groups have sued to have it lifted. The legal battle is still ongoing.

While working to lift some of Trump’s restrictions, Biden left Title 42 in place for over a year, exempting unaccompanied minors but enabling the US to deport tens of thousands of migrants, including families.

Record numbers of migrants have been apprehended trying to enter the United States from Mexico since Biden took office, posing both operational and political difficulties for his administration. Many people have repeatedly crossed into nearby Mexican border cities after being kicked out under Title 42.

But initially, only a few nationalities—including Mexican citizens and immigrants from Guatemala, Honduras, and El Salvador—were welcomed back. The expulsions were extended to include Venezuelans in October. Other nationalities have typically been permitted entry into the country to pursue their immigration cases, which has put a strain on some border cities like El Paso, Texas, where many migrants have recently arrived.

In April 2022, the CDC declared that Title 42 would be repealed because, in light of vaccines and other medical advancements, it was no longer necessary to control the spread of COVID-19. However, a federal judge in Louisiana overturned the decision following a legal challenge brought by a group of 20 Republican-led attorneys general from US states who claimed that increased migration would increase costs for their states.

On November 15, a judge in Washington, D.C., overturned Title 42 in a separate lawsuit that the American Civil Liberties Union (ACLU) and other organisations brought on behalf of immigrant families who claimed the law had harmed them.

After the decision, a group of Republican-controlled U.S. states filed a request with the U.S. Supreme Court to intervene in the case and defend the continuation of Title 42.

The states argued that ending Title 42 would “cause an enormous disaster at the border” and leave them bearing the cost of services for new arrivals in a manner similar to that used in the Louisiana case. The policy should continue in effect while the case is being reviewed, the conservatively inclined Supreme Court ruled in December.