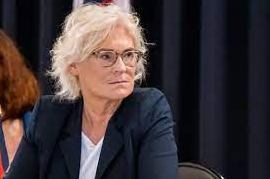 German Defense Minister Christine Lambrecht announced her resignation on Monday, January 16, following a string of public relations missteps and growing criticism that she had not modernised the nation’s armed forces, particularly in the wake of Russia’s invasion of Ukraine.

Her most recent controversy began when she shared a video message on social media on New Year’s Eve in which she attempted to recount her experiences during the war in Ukraine but was “almost drowned out by the noise of fireworks exploding around her,” according to DW. Since then, Lambrecht has come under intense fire, and the calls for her resignation have gotten louder.

She said in a statement that the months-long attention from the media on her prevented fact-based reporting and discussion about soldiers, the army, and security strategy in the interest of German citizens. The important work being done by the soldiers and other highly motivated individuals in the defence sector needs to take centre stage.

Lamprecht was chosen to be the defence minister in December 2021, but she wasn’t thought to be a strong candidate because she lacked the necessary military expertise and experience.

Once the conflict between Russia and Ukraine started, things started to go wrong for her. In light of this, Lambrecht was expected to complete the task quickly after the German government approved a 100 billion euro special fund to bolster the underfunded armed forces of the nation. Her detractors claim that she was unable to do so.

Her capabilities were questioned just last month when 18 Puma infantry tanks, among the military’s most cutting-edge pieces of gear, had to be taken out of service because of technical issues during a military exercise.

Prior to this, Lambrecht received jeers for declaring that Germany was supporting Ukraine by sending 5,000 military helmets during the early stages of the Russian invasion.

When it was revealed that she had taken her son on a trip in a military helicopter, she also found herself in hot water. Although her son had paid for the trip, Lambrecht and her government reportedly found it challenging to stand their ground in the face of the public outcry.

In light of Germany’s upcoming meeting with defence ministers from Ukraine’s western allies at the American military base in Ramstein on Friday to discuss additional support for Ukraine, Lambrecht’s resignation comes at a critical time.

Olaf Scholz, the country’s chancellor, promised to find her replacement right away. According to a DW report, the front-runners are Lars Klingbeil, the leader of the ruling Social Democrats (SPD), Hubertus Heil, a former labour minister, and Eva Högl, the special parliamentary commissioner for the Bundeswehr.

Whoever the country’s next defence minister is, they will face tremendous pressure to not only increase Germany’s military prowess but also guarantee its unwavering support for Ukraine.

Germany is already drawing criticism for its “cautious approach” to supplying Ukraine with powerful weapons. There have been “renewed calls” to send German-built Leopard 2 tanks, which Ukraine views as essential if it is to defeat Russia, or at the very least to approve their delivery from nations like Poland, the BBC reports.

Scholz revealed his intentions to provide Ukraine with Marder infantry fighting vehicles last week. According to the BBC report, the decision was made in conjunction with the US, which at the same time declared it would send Bradley armoured vehicles. Following this, the UK quickly declared it would provide Challenger battle tanks, “increasing pressure on Germany to act.”