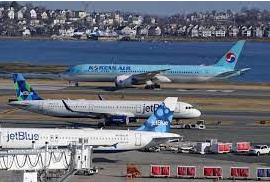 A technical issue on Wednesday resulted in the cancellation or delay of thousands of domestic, international, and international flights, according to the AP. The website of the US Federal Aviation Administration (FAA), which regulates civil aviation, indicated that updated data was not being processed. The FAA system alerts pilots and other flight personnel to hazards or any changes to airport facility services and pertinent procedures.

The FAA declared that its NOTAM (Notice to Air Missions) system had “failed” in an advisory. The website indicated that there was no immediate estimate for when it would return, but NOTAMs issued prior to the outage could still be viewed.

At 7:20 am Eastern Time, the FAA declared that regular operations “have resumed” after several hours of delay.

A NOTAM is a notice that contains information that is crucial to those involved in flight operations but is not known far enough in advance to be made public in other ways, according to the FAA website.

Without NOTAMs, aircraft run the risk of colliding with bird flocks or failing to notice slick runway conditions, among other things. Pilots must check “25 nautical miles to either side of your full route of flight” for pertinent NOTAMs according to the location-based listing of NOTAMs.

In addition to unusual events like parachute jumps, rocket launches, and military drills, the system transmits information about alterations in conditions such as weather, volcanic activity, airspace restrictions, and other factors. According to Simple Flying, it also warns pilots of unusual circumstances at airports, such as icing, broken lights, and the presence of bird flocks.

The FAA maintains a centralised NOTAM system, which projects pertinent data on a monitor in accordance with the planned flight path. But as with any centralised system, bugs and failures affect everyone.

The FAA has instructed all US flights to postpone takeoff until 9 am EST, according to the AP. Even though the East Coast is where the disruptions are most prevalent, they are moving west.

How long this system will be down is not yet known. One thing is certain, though: until the system is back online, operations will be impacted given its importance in ensuring safe flight operations.

US airports have reported crowding and chaos as a result of the system failure, which comes as they are already under scrutiny due to staffing shortages and deteriorating infrastructure.

The FAA and airlines have received complaints from passengers regarding their lack of information and communication. Although the FAA claims that normal operations have now resumed, the delays’ effects are still being felt in the US.