Here’s why US state Arkansas banned ‘Latinx’ from govt documents 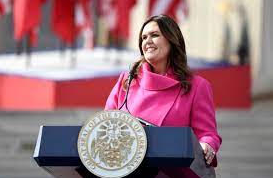 In her first day in office, Sarah Huckabee Sanders, the newly-elected Republican governor of the US state of Arkansas and a former press secretary to then-US President Donald Trump, got right to work and signed seven executive orders. One of these directives prohibited the use of the term “Latinx” in official documents, citing “the government’s responsibility to respect its citizens and use ethnically appropriate language, particularly when referring to ethnic minorities.”

In the brief time that it has been in use, the term “Latinx” has a contentious past. The phrase has not taken off as much as progressives had hoped despite being praised by many as a gender-neutral substitute for the commonly used “Latino/Latina,” used primarily in the US to refer to people of Latin American origins.

Notably, in December 2021, Democratic Congressman Ruben Gallego prohibited the term “Latinx” from being used in any communications from his office. The word was introduced, he claimed in a statement, “largely to appease white rich progressives.”

The term was added to Merriam-dictionary Webster’s in 2018, and according to Merriam-Webster, “Latinx purposefully breaks with Spanish’s gendered grammatical tradition.” The male/female binary is innate in Spanish, which, unlike English, lacks a neuter or non-gendered noun form. Therefore, nouns can either be masculine or feminine, which is denoted by the “-a” or “-o” ending in Latin (Latina).

It was first spotted online in 2004 according to Google Trends, which charts the usage of terms online using Google’s search engine. A Puerto Rican psychological periodical used it first in academia to “challenge the gender binaries encoded in the Spanish language.”

Latinx usage is controversial in large part because it lacks grammatical coherence. In order to “ensure that the changes experienced by the Spanish language, in its constant adaptation to the needs of its speakers, do not break the essential unity that it maintains throughout the Hispanic area,” the Royal Spanish Academy (RSA), a Spanish organisation, does not recognise the suffix “X.”

Latinx usage, according to detractors, smacks of linguistic imperialism because it infuses Spanish with American sensibilities. However, proponents of the term also raise this issue in their arguments, challenging the RSA’s role in establishing the “correctness” of a language that is constantly changing.

In actuality, the suffix “X” conveys a very important meaning. Boston University professor of English Maia Gil’Ad told BU Today that the X can denote a “categorical impossibility” and an unknown value, similar to how it does in mathematics. This not only makes non-binary gender identities more inclusive, but it also emphasises the diversity of identities among Latinx people.

Latin America, which spans a sizable region from Mexico to Chile’s far southern tip, is diverse. Languages, cultures, and ethnic backgrounds can differ within one country as well as between them.

The US has historically homogenised and grouped together people who come from these various countries.