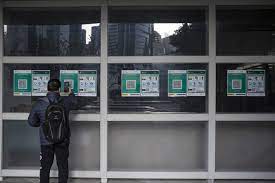 As the city prepares for a partial reopening of the border with the rest of China, Hong Kong authorities will introduce a new “health code” mobile phone application next week that visitors to mainland China will be obliged to use.

The app will work similarly to one in China, saving a user’s name, address, and vaccination status, as well as allowing users to scan QR codes to gain access to restaurants and other locations. It also rates users’ infection risk based on their previous check-ins.

The Hong Kong app, unlike China’s, will not trace a user’s movements, according to the authorities. Only Hong Kong residents who intend to cross the border must download the app, which will be available on December 10.

“We will launch the app next week for the public to test and trial and facilitate the gradual reopening of the border,” Alfred Sit, secretary for innovation and technology, said in a news conference.

Following Beijing’s lead, the global financial powerhouse has imposed some of the world’s harshest travel restrictions, anticipating that China, its key source of economic development, will allow some cross-border movement.

According to the government, the return of cross-border travel will be subject to a quota at first.

The Omicron coronavirus variety that made headlines last week has been identified in mandated testing of inbound travellers, but it has not spread beyond Hong Kong’s quarantine hotels into the general public.

Despite the fact that there have been few local cases this year and a COVID-19-free environment, Hong Kong has maintained its mandated hotel quarantine of up to 21 days for arrivals from most countries at the expense of the travellers.