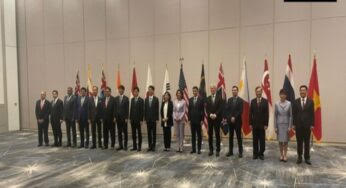 The Indo-Pacific Economic Framework (IPEF) can change the economic dynamics of the Asia-Pacific region, especially Pakistan as the group is ostensibly created to encourage regional economies to “decouple” from the Chinese market by providing them with alternative supply chains. Advocate Muhammad Hamza Qamar, writing in Daily Parliament Times, said that Washington believes it will help exclude China from the regional trading and supply systems. Asia Pacific region remains the world`s growth engine despite the weathering effects of Covid-19 and stringent waves of global climatic fluctuations. The regional dynamics have been a focal point since the Asian economic giant China has been engaged in expanding regional trade routes and supply chains with initiatives like Belt and Road Initiative (BRI), connecting the region with silk-route, etc. Asia Pacific venture has taken a more serious direction since US president Joe Biden launched the IPEF earlier this year. IPEF`s prospects and evolution will partly hinge on how the US and its regional friends and partners define its value addition in a competitive landscape, said Qamar.It is a widespread notion that the initiative taken by the Biden administration is to counter the growing economic clout of China in the Asia Pacific region. Its four founding pillars are trade, supply chains, clean energy, decarbonization and infrastructure, tax, and anti-corruption. The framework has engaged a dozen of its regional partners including Australia, Indonesia, Brunei, Japan, India, the Republic of Korea, Malaysia, New Zealand, Thailand, Philippines, and Vietnam. Together they represent almost 40 percent of the world`s GDP. Since the growing hostility in the region`s economic framework, Pakistan`s prospects are quite crucial and require shrewd handling. Pakistan has faced a heavy toll of Covid-19 as well as the recent floods have taken aback the country after 20 years of economic development. Seeking the bailout plan of IMF, the growing inflation rate has pulverized the economy. Considering the recent economic crisis of Sri Lanka which has brought untold misery and economic hardship to the general public, concerned ministries/authorities in Pakistan shall re-evaluate the possible consequences before seeking a loan from China, said Qamar. Also, Pakistan needs to revisit its economic policy toward its neighbors including India, Iran, and Bangladesh, instead of solely relying on China, reported Daily Parliament Times. Bilateral trade routes along the lines of the Comprehensive Economic Partnership Agreement (CEPA) must be pursued as CEPA will allow both India and Bangladesh to fill the trade fallout gaps.CEPA is also likely to reshape the Asian future trade connectivity through the Asian Highway Network (AH-1 and 2) which will produce a cluster of connectivity. Hence, Pakistan must cut short its over-dependency on foreign loans, allowing it only in a sparing manner, and engage more in regional trade routes and supply chain networks along with enhancing ground capabilities to grasp a firm foothold, said Qamar.