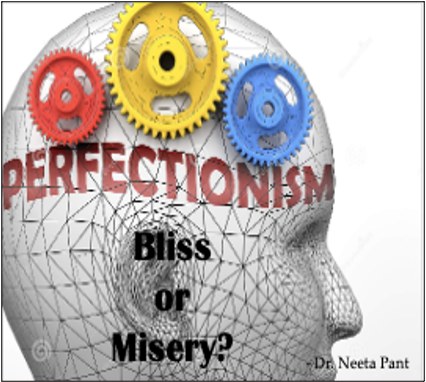 ‘What are your weaknesses and strengths?’ is the most common question asked in job interviews.  The most cliché answer to both is – ‘Perfectionism.’  While the candidate is projecting it as a weakness he/she is not only paying a coy compliment to self, is also subtly suggesting that “I’m detailed oriented and produce flaw-less work”.  And while projecting it as strength, the candidate is openly telling – ‘I produce work that is par excellence and above normal standards’.  ‘Perfectionism’ is perceived as a badge of honour with so much pride and superiority.

Traditionally, perfectionism is perceived as a positive trait and is flaunted like one.  A perfectionist is who has a personality that strives for flawlessness accomplished through fixating on imperfections, trying to control situations, over achieving, working hard, or being critical of the self or others.  But does it sound healthy?  It will be helpful to define perfectionism to understand this better.

We often conflate perfectionism with higher-than-normal standards, attention to detail, commitment to excellence,  being over-competitive and having desire to win/control always.  But is it Perfectionism?  Can one not have high standards without being termed as “Perfectionist?”  “Perfectionism” term is overused and misunderstood completely.

Perfectionism actually is a paralysing rigidity that is rooted in a fear of failure.  It’s about a need to be accepted by others, coupled with a fear of rejection & not loved/liked enough.  A perfectionist will remain rigidly adhering to a standard they’ve set for themselves, even if that standard has surpassed “aiming high” to reach “virtually impossible.”  True perfectionist struggles to appropriately adjust to the environment or situation.

Signs of being a Perfectionist –

People who are perfectionists may feel the need to achieve perfection constantly.  They might also exhibit the following-

Many factors can contribute to development of perfectionism. A few include –

Is Perfectionism a problem?

Well, it might be, but whether or not it’s a problem seems to be both a matter of opinion and levels/degree of perfectionism.  There are two sides of this coin –

Perfectionism can also be a problem if –

The point to consider here is whether a perfectionists’ standards for self are just high or impossibly high.  If you’re setting yourself up for failure by raising the bar so high that is not humanly achievable, then that amounts to the wrong kind of perfectionism.  If instead of perpetually fretting about the failures, you merely insist on giving your best, that’s nothing to worry about.

So how do you know if you are a maladaptive perfectionist, consider the following –

Unsurprisingly, unhealthy perfectionism can wreak havoc with your health, relationships and life in general.  So how can you overcome maladaptive perfectionism?

✓ Abolish the ‘all or nothing mindset’ –  ‘All or nothing’ thinking is self-defeating. Nothing in life goes smoothly and without glitches. Accept that you will do some things imperfectly at times.  Focus on progress then perfection.

✓ Awareness –   Be aware of your perfectionist patterns.  Examining these patterns will help you become aware of your tendencies and, in turn, be in a position to alter them.

✓ Observe self-acceptance – Instead of berating yourself, recognize that you’ve done your best at the given moment. Look for what went right and then resolve to improve.

✓ Establish realistic goals –  The capabilities of an individual need a careful assessment, has to be more realistic, with sensible deadlines and feasible goals. Take small and incremental steps rather than setting unattainable goals.  By setting smaller, achievable goals, you can work up to a more successful outcome.

✓ Appreciate the process  –   Learn to overcome the fear of failure, experience and appreciate your mistakes and constantly improve and learn during the process.

✓ Self-Reflection –  To perform effectively in the workplace, accepting and moving on from mistakes is critical.  Knowing where to start, change and adapt will help you move forward.  Analyse the situation, consider the options available, make a decision and step into action.

Culturally, Perfectionism is something that is viewed as a secret strength but it isn’t. True perfectionism can be agonising and incapacitating.  There are many drawbacks of perfectionism.  It can be crippling for the affected person, can hold people back, rather than seeing them achieve to their potential. There’s a big difference between upholding high standards and perfectionism. If one is prepared to strive for excellence while acknowledging that doing so can require some flexibility, does not bring any har.  But if one tends to be much more rigid in approach, that’s where perfectionism get complicated and painful too.

Instead of pursuing perfectionism, we should pursue progress.  We should leave perfect precision to machines and remember that to err is human.