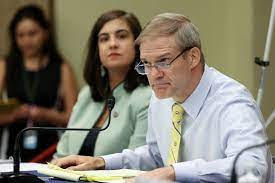 Republicans in the U.S. House of Representatives welcomed reports that Twitter Inc is poised to agree to a sale to Elon Musk and called on the Tesla chief executive to return former President Donald Trump to Twitter.
“Hey, @elonmusk it`s a great week to free @realDonaldTrump,” tweeted the House Republican Conference, which currently represents 209 lawmakers.
U.S. Representative Jim Jordan, a member of the Freedom Caucus of conservative House Republicans, said the deal would be good for shareholders and good for free speech.
Jordan and other Republicans have been critical of Twitter for banning Trump and other notable conservatives.
Representative Marjorie Taylor Greene, whose personal account was permanently banned from Twitter for tweets that repeatedly violated the social media`s misinformation policy on COVID-19, said on her congressional Twitter feed, “I should get my personal Twitter account restored.”
Twitter banned Trump`s account due to the risk of further violence after the U.S. Capitol was stormed on Jan. 6, 2021.
“I think this deal looks like it`s good for the shareholders; second, it`s good for free speech, it`s good for the First Amendment,” Jordan said in an interview with Fox News, referring to the constitutional amendment guaranteeing freedom of speech.
Last week, a group of 18 U.S. House Republicans sent Twitter board members a letter asking them to preserve all records and materials relating to Musk’s offer to purchase Twitter, laying the groundwork for a potential investigation.
The Republicans are in the minority in the House, which is controlled by the Democrats.