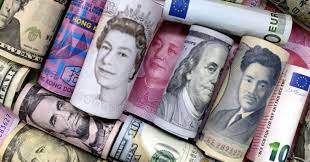 The Russian ruble fell to a record low against the Swiss franc on Thursday, while the euro fell to a
multi-year low against the Swiss franc after Russian forces fired missiles at numerous Ukrainian cities
and landed troops on the country’s south shore.
Riskier commodity-linked currencies, such as the Australian dollar, fell as Ukraine claimed Russia had
launched a full-fledged invasion.
Safe haven currencies such as the yen and the US dollar were in high demand amid reports of
explosions in Kyiv, Ukraine’s capital, and gunfire near the city’s main airport.
The rouble fell as much as 5.77 percent to an all-time low of 86.1198 per dollar.
The euro sank 0.84 percent to $1.1209, its lowest level since January 31.
In comparison to other traditional safe-haven currencies, the euro fell as much as 1.28 percent to a
nearly one-month low of 128.37 yen and as much as 0.84 percent to 1.0292 Swiss franc, the lowest
since May 2015.
The Australian dollar fell by up to 0.90 percent to $0.7167, while the New Zealand dollar fell by up to
1.00 percent to $0.6706.
“The situation appears to be getting worse before it gets better, which means commodities currencies
may drop,” said Joseph Capurso, a strategist at Commonwealth Bank of Australia.

“If things go really terrible,” the Australian dollar might touch $0.70, and the euro could fall “quite a
bit further,” he warned.
Sterling was more resilient, falling 0.41 percent to $1.3490, its lowest level since February 15.
For the first time since Jan. 31, the US dollar index, which compares the greenback to six major
currencies, climbed as much as 0.60 percent to 96.762.

Aside from its role as a safe haven, the dollar has been bolstered by anticipation that the Federal
Reserve will begin a rate hike campaign next month, however mounting concerns in Ukraine have
traders reducing bets on a larger half-point increase to 16 percent, down from 25 percent earlier in
the day.