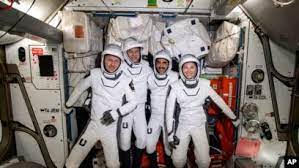 In less than an hour, the heat-scorched Crew Dragon was hoisted onto a recovery ship before the capsule`s side hatch was opened and the four astronauts were helped out one by one for their first breath of fresh air in nearly six months.
FIERY RE-ENTRY, THEN FRESH AIR
Still garbed in white-and-black spacesuits, their strength and equilibrium shaky from 175 days in a weightless environment, were assisted onto special gurneys as they waved and gave thumbs-up for cameras.
Each was to receive a routine medical checkup aboard the ship before being flown by helicopter back to Florida.
The return from orbit followed a fiery re-entry plunge through Earth`s atmosphere, generating frictional heat that sent temperatures outside the capsule soaring to 3,500 degrees Fahrenheit (1,930 degrees Celsius).
Two sets of parachutes billowed open above the capsule in the final stage of descent, slowing its fall to about 15 miles per hour (24 kph) before the craft hit the water off the coast of Tampa, Florida.
Applause from the SpaceX flight control center in suburban Los Angeles was heard over the Webcast.
The newly returned astronauts were officially designated as NASA`s “Commercial Crew 3,” the third full-fledged, long-duration team of four that SpaceX has flown to the space station under contract for the U.S. space agency.
SpaceX, founded in 2002 by Elon Musk, the billionaire CEO of electric carmaker Tesla Inc, who recently clinched a deal to buy Twitter, supplies the Falcon 9 rockets and Crew Dragon capsules now flying NASA astronauts to orbit from U.S. soil.