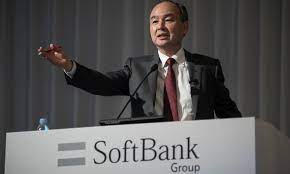 Sliding valuations in the listed portfolio of SoftBank Group Corp`s Vision Fund unit point to more pain for CEO Masayoshi Son when the group reports April-June earnings on Monday as investors go cool on the high-growth firms he favours.
Vision Fund`s public portfolio first-quarter loss could top $10 billion, Redex Research analyst Kirk Boodry estimated, after falls in robotics firm AutoStore Holdings Ltd, e-commerce firm Coupang Inc and artificial intelligence firm SenseTime Group Inc, whose shares fell by almost half on the last day of June.
While there is limited visibility on valuations of Vision Fund`s private portfolio, writedowns contributed to the record $26 billion Vision Fund loss reported in May as investor concern over prospects for high-growth stocks feeds through to private markets.
The extent of the reevaluation was underscored when Swedish payment firm Klarna last month raised capital at a valuation 85% lower than at the SoftBank-led funding round the year before.
Writedowns in the private portfolio are unlikely to reflect the current weakness in valuations in the market, Jefferies analyst Atul Goyal said.
Chief Executive Son had been investing rapidly through the second Vision Fund, in which he has a personal stake, but in May pledged to “play defense” and reign in spending amid market turmoil triggered by rising interest rates and political instability.
The 64-year-old billionaire previously racked up personal losses betting on derivatives and publicly traded stocks through the SB Northstar trading arm, which has since been shuttered.
Compounding uncertainty at the tech conglomerate is the departure of a string of Son`s lieutenants. A key architect of SoftBank`s push into investing in late-stage startups, Rajeev Misra, has stepped back from managing Vision Fund 2 to launch his own fund.
The cost of insuring against a default in SoftBank`s debt and its bond yields remains elevated, albeit off last month`s highs, and analysts point to the conglomerate`s constrained financing options given the portfolio weakness.
“Within Vision Fund itself, in the public holdings they have they don`t really have a lot of options,” said Redex Research`s Boodry.
SoftBank has been reliant on its large and liquid stake in e-commerce firm Alibaba Group Holding Ltd for financing. The group has now raised as much as $22 billion using the shares, the Financial Times estimated.
The conglomerate is targeting an initial public offering for chip designer Arm in the United States following the collapse of a sale to Nvidia Corp but analysts question the prospects for the listing.
SoftBank launched a 1 trillion yen ($7.5 billion) buyback last November, supporting shares which have fallen by about half from highs in March 2021, but had used more than 60% of the capital by late June