Patient Consumerization – is it ethical 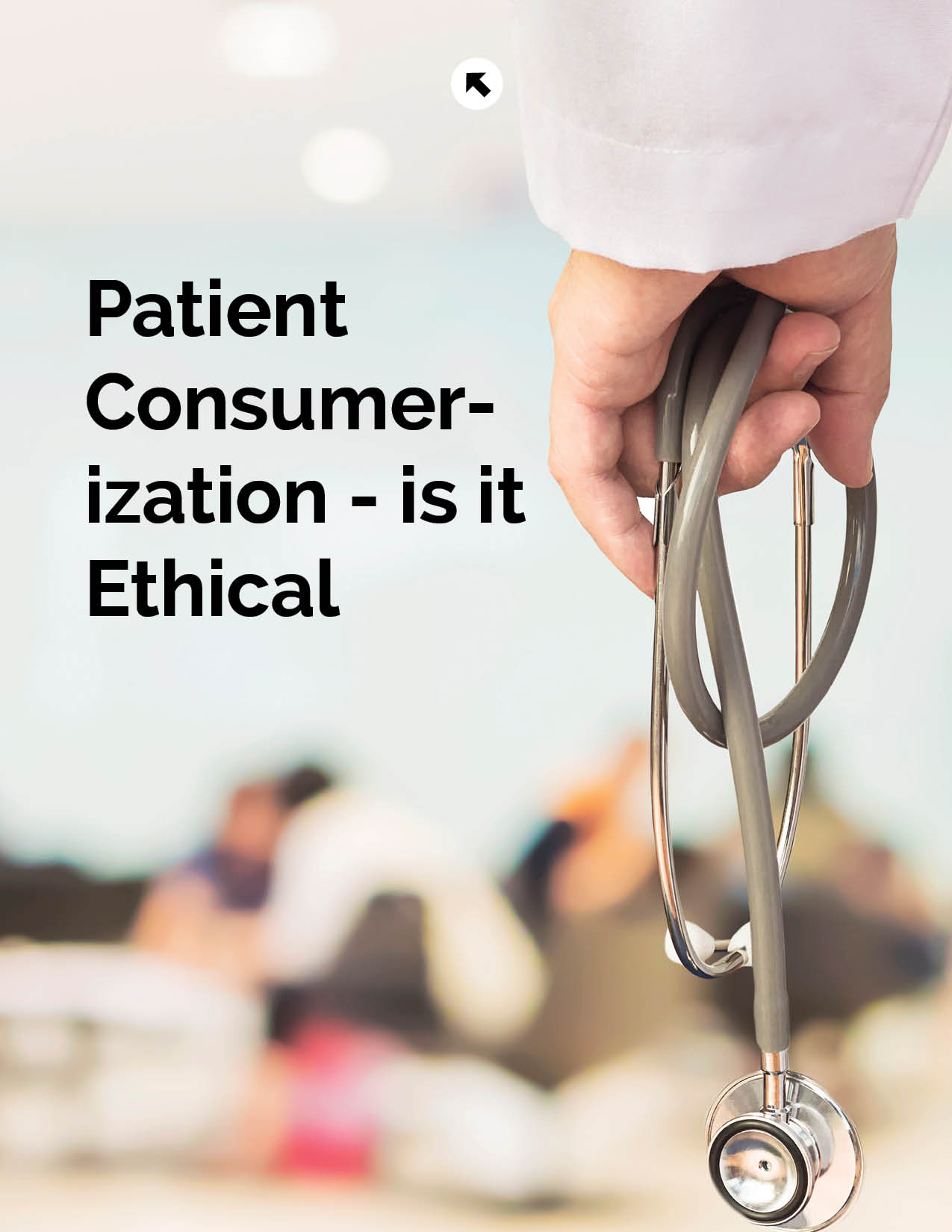 Patient Consumerization – is it ethical

Doctors and medical professionals are noted for their aversion to medical consumerism. For both patients and doctors, the relationship between them is more than simply the result of market forces, or rather the hiring and offering of services. In countries where the state funds medical services, it is natural as it is out of need that people ask for medical services and goods. Patients are simply not customers in such healthcare models. Further patients need an imperfect solution to a stressing need which is their good health which in turn differs from traditional commodities.

Medical professionals are more inclined to view their functions being centered around the patient but not as consumers they are supplying services to. This has both positive and negative implications for individual patients. While the lofty relationship between the diseased and the healer is maintained, it also often means lack of accountability- no scrutiny of action and the discretional power that emerges from it. And as most of us realize discretionary power is one of the seeds of abuse of power. But on the other had it is also true that it is improper to see healing, the giving of life as simply a business. To be honest, we have passed the stage where it would be helpful to consider the ethical implications of patients as consumers. It is happening and they had decided before. Let’s look at what happened instead!

As a means of patient wellness and supremacy of patient interests, patient consumerism is only desirable. Additionally, both healthcare and the very definition of consumers have evolved over time. In fact, experts point out three distinct generations that such interaction between doctors and patients can be divided into. Some pro-consumer medical schools of thought further proclaim that by itself there is no significant issue of medical and patient consumerism but rather different forms of the same combine in different respects.

The modern relationship between patients and physicians is a result of a three generational interaction that began back in the sixties of previous century in the US. This era saw patients challenging the hallowed ground of healthcare professionals as the supreme medical authority. For countries with a commercial healthcare system like the US, the competition for acquiring customers while in state-run healthcare systems it resulted in greater options for receiving medical treatment

The eighties of the previous century happened to be the start of the second generation of the development of doctor-patient relationships. It was in this phase that consumers themselves started funding their need for desires that they didn’t naturally have but medicine could give them access to. It was a niche market back then and such consumers made their bodies commodities which had an exchange value in which the customer pays up for receiving the specified medical intervention.

The nineties can be said to be the beginning of the third generation of the relationship. In this phase the market became the preferred healthcare model. The focus in this period was on healthcare firms cutting down on costs and increase organizational productivity. Three characteristics that appeared from the consumer behavior in this generation was:

Finally, we are likely to be in the fourth generation of doctor-patient relationships as socialism rises in prominent western economies. But this is something related more to politics than just public interest and behavior and the last word is still to be etched. In one respect it might be seen as the culmination of the prosumerism that we had seen earlier.

We need to note that the generational analysis of patient-doctor relationship did not take place at the same time in all places. Nevertheless, almost all healthcare systems exhibit these characteristics to a greater or lesser degree. We should not view the generational paradigm in terms of succeeding each other but rather as coexisting features.

Let us examine the preceding third generation of such relationship.

With the constraints of healthcare costs rise, medical consumerism too needs to change to remain relevant. The following characteristics mark the third generation we are discussing here:

Today more than ever people are conscious of their healthcare choices and the need to keep them aligned with affordable costs.

One particularly prominent and interesting difference in medical consumerism between the start and the present is how the first generation concentrated more on systematic lapses, the third generation is more inclined towards placing responsibility at the individual level. It blends in well with healthcare systems trying to increase the population net they cover but need to reorganize services to keep services affordable and sustainable.

According to experts in the third generation both the healthcare system and the individual patient are fully engaged. This means that patients become responsible for looking after their own health and prevent or postpone the onset of diseases by changing their lifestyle, managing long-term or chronic conditions by themselves and consuming individualized services in the hats of a prosumer. Let us not discuss these responsibilities of such present-day patients.

Such patients are active and satisfied, they know how to look after themselves and try their best to keep health deterioration in check. They want, plan and work towards their good health. Individual good health is in such behavior is under the control of the individual himself. They achieve this through individual choice, proper behavior and effort. This view however does not accommodate the needs of an aging society, the increasing inequality, societal health factors and power relations.

The concept of self management in healthcare is rooted in patient responsibility precepts. It acts in coordination with healthcare providers and bears much promise for managing long-term health issues. It not only informs individuals about their health maladies but also encourages them to involve themselves actively in managing such illnesses. It stresses on healthy patient behavior and the adoption of suitable strategies for the management of symptoms associated with the illness. While the principle promises much, in actual situations patients are not so keen as on paper.

This precept is based on the synthesis of the ideas of both consumption as well as production. As per this mindset, people decide their needs and then continues to produce and later consume them. But several experts point how modest the impact of such practices has been. They further note that patients have greater priority for addressing and redressal of complaints, more autonomy, greater awareness and finally more emphasis on their rights as patients.

There has been a noted reversal in state policy in healthcare in the US in the recent past, as reflecting the changing needs and nature of societies, what we have earlier referred to as a potential fourth generation of patient-doctor relationships.

Patient consumerism at least recognizes patients as consumers and does not foster a culture of exclusive elitism. In deprived economies often doctors want to see the money, an emphasis on consumerism in law and practice would mean that they need to get their act together for that!